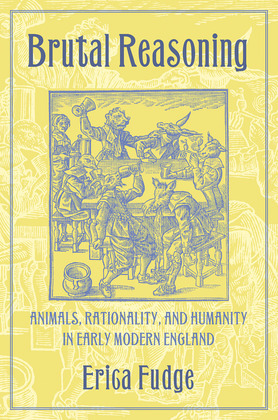 Early modern English thinkers were fascinated by the subject of animal rationality, even before the appearance of Descartes's Discourse on the Method (1637) and its famous declaration of the automatism of animals. But as Erica Fudge relates in Brutal Reasoning, the discussions were not as straightforward—or as reflexively anthropocentric—as has been assumed.

Surveying a wide range of texts-religious, philosophical, literary, even comic-Fudge explains the crucial role that reason played in conceptualizations of the human and the animal, as well as the distinctions between the two. Brutal Reasoning looks at the ways in which humans were conceptualized, at what being "human" meant, and at how humans could lose their humanity. It also takes up the questions of what made an animal an animal, why animals were studied in the early modern period, and at how people understood, and misunderstood, what they saw when they did look.

From the influence of classical thinking on the human-animal divide and debates surrounding the rationality of women, children, and Native Americans to the frequent references in popular and pedagogical texts to Morocco the Intelligent Horse, Fudge gives a new and vital context to the human perception of animals in this period. At the same time, she challenges overly simplistic notions about early modern attitudes to animals and about the impact of those attitudes on modern culture.