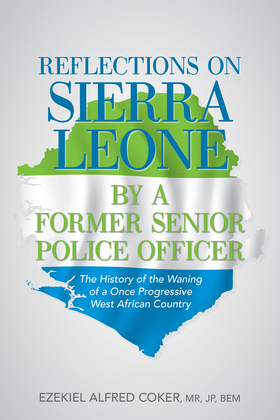 Reflections on Sierra Leone by a Former Senior Police Officer

Sierra Leone is historically unique. A small part of the territory which was mainly Freetown (which was to become the capital of the whole country) and surrounding areas was acquired by the British in the late eighteenth century and used to resettle emancipated slaves and their descendants from America and Britain. That part which was formerly known as the Colony became home to a heterogeneous people (the Creoles) who would later play a significant role in the development of the country out of which intellectual light would radiate across the region. However, six years after gaining independence in April 1961, Sierra Leone would become embroiled in serious political turmoilexacerbated by a series of military coups and followed by eleven years of an atrocious civil war.

In Reflections on Sierra Leone by a Former Senior Police Officer, author and retired officer Ezekiel Coker offers an introspective look into both the history and personal experiences of life in a declining, once prosperous West African country. Part memoir and part history, Coker provides insight into his own encounters with the military, imprisonment, and his new life, and he details a comprehensive living history of Sierra Leones social and political landscape following its independencewith a comparison of life in the country when it was under British colonial rule.

Once a shining star in the region, the ravages of civil war and political upheaval have culminated in a quagmire in which the country now wallows. It is the hope that a better understanding of an often undocumented, unheard history will provide a roadmap for restoring Sierra Leone to its former prosperity as a beacon of West Africa.