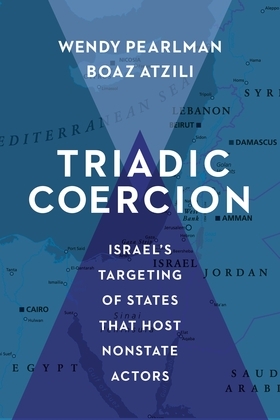 In the post–Cold War era, states increasingly find themselves in conflicts with nonstate actors. Finding it difficult to fight these opponents directly, many governments instead target states that harbor or aid nonstate actors, using threats and punishment to coerce host states into stopping those groups.

Wendy Pearlman and Boaz Atzili investigate this strategy, which they term triadic coercion. They explain why states pursue triadic coercion, evaluate the conditions under which it succeeds, and demonstrate their arguments across seventy years of Israeli history. This rich analysis of the Arab-Israeli conflict, supplemented with insights from India and Turkey, yields surprising findings. Traditional discussions of interstate conflict assume that the greater a state’s power compared to its opponent, the more successful its coercion. Turning that logic on its head, Pearlman and Atzili show that this strategy can be more effective against a strong host state than a weak one because host regimes need internal cohesion and institutional capacity to move against nonstate actors. If triadic coercion is thus likely to fail against weak regimes, why do states nevertheless employ it against them? Pearlman and Atzili’s investigation of Israeli decision-making points to the role of strategic culture. A state’s system of beliefs, values, and institutionalized practices can encourage coercion as a necessary response, even when that policy is prone to backfire.

A significant contribution to scholarship on deterrence, asymmetric conflict, and strategic culture, Triadic Coercion illuminates an evolving feature of the international security landscape and interrogates assumptions that distort strategic thinking.