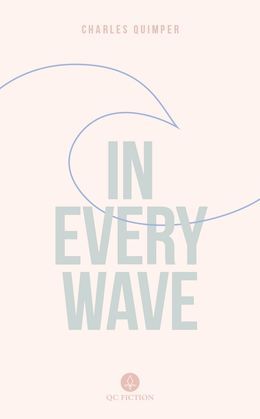 A man loses his daughter while swimming one summer. This little gem of a novella–sad and beautiful and spellbinding all at once–is the tale of how he strives to be reunited with her again, whether back home on dry land or thousands of miles underwater. Racked with guilt and doubt, he lingers over her memory, refusing to let her go. He imagines and reimagines the moment she slipped away from him as he searches for her behind every rock, in every bush, in every wave.Author: Born in Quebec City in 1977, Charles Quimper is a former bookseller and has contributed to a number of magazines. Les Libraires magazine recognized the “tenderness, infinite sadness, and absolute beauty” of his debut novel, while Le Devoir hailed “a new literary voice of remarkable density.”Reviews“If I had a book of the year, this is it.” (Stuart John Allen, Winstonsdad’s Blog)“Piercing and compact, Charles Quimper’s novella In Every Wave follows a grief-consumed father through a vortex of regret and fragmented fantasies. Here, sorrow is an ocean, and lost possibilities lurk behind every swell […] Every phrase is a foghorn, and every utterance rasps. Almost too tender to touch…” (★★★★★, Foreword Reviews)“one of the most touching books I have ever read […] a real gem” (Stuart John Allen, Winstonsdad’s Blog)“a picture of tenderness and a true-to-life image of the gaping hole left in the heart by loss” (World Literature Today)“In Every Wave is beautiful, poetic, and profound” (Naomi MacKinnon, Consumed By Ink)“Akin to an epic poem […] an extremely powerful soliloquy that addresses every parent’s fear, losing a child, in a poetic and powerful manner. […] I wouldn’t be at all surprised to see this debut work appear on the Best Translated Book Awards longlist and will be eagerly awaiting Charles Quimper’s later writings.” (Tony Messenger, Messenger’s Booker (and more) Blog)