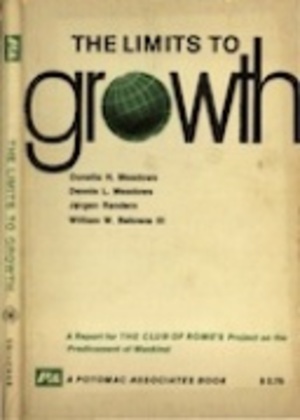 The Limits to growth; a report for the Club of Rome's project on the predicament of mankind

The Limits to Growth is a 1972 book about the computer modeling of exponential economic and population growth with finite resource supplies. Funded by the Volkswagen Foundation and commissioned by the Club of Rome it was first presented at the St. Gallen Symposium. Its authors were Donella H. Meadows, Dennis L. Meadows, Jørgen Randers, and William W. Behrens III. The book used the World3 model to simulate the consequence of interactions between the Earth's and human systems.

Five variables were examined in the original model. These variables are: world population, industrialization, pollution, food production and resource depletion. The authors intended to explore the possibility of a sustainable feedback pattern that would be achieved by altering growth trends among the five variables under three scenarios. They noted that their projections for the values of the variables in each scenario were predictions "only in the most limited sense of the word," and were only indications of the system's behavioral tendencies. Two of the scenarios saw "overshoot and collapse" of the global system by the mid to latter part of the 21st century, while a third scenario resulted in a "stabilized world."