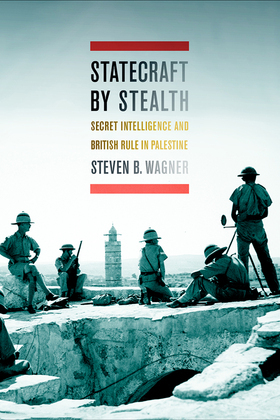 Britain relied upon secret intelligence operations to rule Mandatory Palestine. Statecraft by Stealth sheds light on a time in history when the murky triad of intelligence, policy, and security supported colonial governance. It emphasizes the role of the Anglo-Zionist partnership, which began during World War I and ended in 1939, when Britain imposed severe limits on Jewish immigration and settlement in Palestine.

Steven Wagner argues that although the British devoted considerable attention to intelligence gathering and analysis, they never managed to solve the basic contradiction of their rule: a dual commitment to democratic self-government and to the Jewish national home through immigration and settlement. As he deftly shows, Britain's experiment in Palestine shed all pretense of civic order during the Palestinian revolt of 1936–41, when the police authority collapsed and was replaced by a security state, created by army staff intelligence. That shift, Wagner concludes, was rooted in Britain's desire to foster closer ties with Saudi Arabia just before the start of World War II, and thus ended its support of Zionist policy.

Statecraft by Stealth takes us behind the scenes of British rule, illuminating the success of the Zionist movement and the failure of the Palestinians to achieve independence. Wagner focuses on four key issues to stake his claim: an examination of the "intelligence state" (per Martin Thomas's classic, Empires of Intelligence), the Arab revolt, the role of the Mufti of Jerusalem, and the origins and consequences of Britain's decision to end its support of Zionism.

Wagner crafts a superb story of espionage and clandestine policy-making, showing how the British pitted individual communities against each other at particular times, and why.