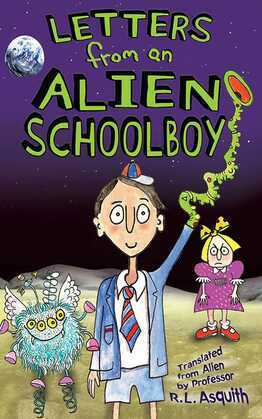 Letters from an Alien Schoolboy

When Flowkwee goes to planet Earth on a mission, he has to stay disguised?as a small Earthling called Nigel, with only one head and four appendages! But that's not all: His personal mission is to go to a school every day to collect Earthlings to "improve." Nigel knows he has to act dumb around the Earthlings, so in math class he pretends he only knows his times table up until two million and six times nine, and in literacy class he pretends to read like a newborn Faathing baby. A lot of Earthling life is totally weird to Nigel?the odd removable skins Earthlings wear called "clothes" and the funny paint on his mom's face called "makeup"?but in some ways Earth is even better than planet Faa. Earth is full of cool sounds made up of all different pitches and noises called "music," and Earthlings get gifts every year on their birthdays, just for being alive! But while Nigel starts to embrace his Earthling self, in the background lurks a coming invasion that his dad keeps talking about. And why are they so interested in a substance called "spinach"?

Letters from an Alien Schoolboy is sure to delight even the most reluctant readers as Earthling kids giggle their way through Nigel's gaffes and escapades. This is a fantastic gift for girls and boys eight and up!