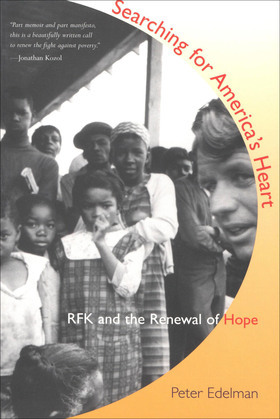 Peter Edelman has worked as an aide to Robert F. Kennedy, a lawyer, a children’s advocate, and a policymaker. He has devoted his life to the cause of justice and to ending inequality. But in 1996, while serving in the Clinton administration as an expert on welfare policy and children, he found himself in an untenable position. The president signed a new welfare bill that ended a sixty-year federal commitment to poor children, and as justification invoked the words of RFK. For Edelman, Clinton’s twisting of Kennedy’s vision was deeply cynical, so in a rare gesture that sparked front-page headlines, he resigned. The nation, he believed, had been harmed.

In this book, he shows that in an age of unprecedented prosperity, Americans have in many respects forsaken their fellow citizens, leaving behind a devastatingly large number of poor and near-poor, many of them children. Edelman shines a bright light on these forgotten Americans. Based in part on a firsthand look at community efforts across the country, he also proposes a bold and practical program for addressing the difficult issues of entrenched poverty, focusing on novel ways of braiding together national and local civic activism, reinvigorating our commitment to children, and building hope in our most shattered communities—creating a vision true to the legacy of Robert F. Kennedy.

“I have read a lot of books on inequality, but none offers a more thoughtful vision of poverty and welfare in America . . . compelling.”?William Julius Wilson, author of When Work Disappears
Publication date
May 12, 2021
Publisher
Houghton Mifflin Harcourt
Page count
284
ISBN
9780547561363
Paper ISBN
9780395895443