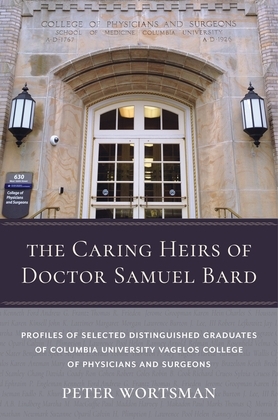 The alumni of Columbia University Vagelos College of Physicians and Surgeons (VP&S) have made remarkable strides in medicine, academia, public health, and industry. In this they follow in the footsteps of Samuel Bard (1742–1821), a prominent early American physician and a founder of what would become VP&S. In The Caring Heirs of Doctor Samuel Bard, Peter Wortsman offers a selection of profiles of Columbia-educated doctors who have made a fundamental difference in the lives of others.

The physicians profiled in this book represent the complete spectrum of MDs. They have charted new fields of medicine, resolved long-standing biochemical mysteries, discovered the causes and cures of diseases, developed vaccines, pioneered surgical procedures, helped halt epidemics, and cared for imperiled populations. Some have run hospitals, medical schools, universities, the National Institutes of Health, the National Library of Medicine, the Centers for Disease Control and Prevention, city health departments, and major pharmaceutical concerns. Others practiced at the White House, climbed mountains, or flew to outer space. Still others wrote pioneering papers, edited prestigious medical journals, and authored prize-winning books and best-selling novels. In each case, the clinical training, scientific thoroughness, and humanistic values inculcated at Columbia had a formative influence on their thinking and practice. In telling their stories, The Caring Heirs of Doctor Samuel Bard illustrates the importance of clinical rigor and humanistic caring in the practice of medicine and offers readers a rare insight into the heart and soul of American medicine at its best.