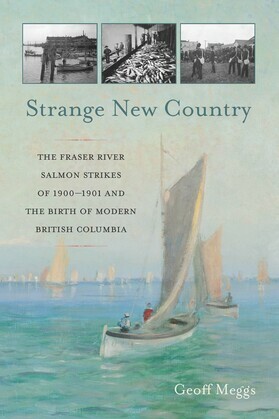 Salmon gillnetting in the turbulent waters of the Fraser River at the turn of the last century was dangerous, back-breaking work. Skiffs were equipped with a single sail, but most maneuvering had to be accomplished by oars, an almost impossible task against any current or tide. Once towed to the grounds by a cannery tug, the fishermen were on their own for at least twelve hours, casting their 400-metre long nets out and pulling them back by hand. Their only shelter was a partial tent over the bow. Many came to grief on dark, windy nights as they blew out of the main channel to the mudflats of the estuary, or worse, the open waters of the Strait of Georgia.

When the powerful Fraser River Canners? Association fixed the maximum price per salmon at 15 cents, fishermen united in their determination to win a decent living. Their strike shut down British Columbia?s second-largest export industry and effectively resulted in the imposition of martial law as the canners, frustrated by political deadlock in Victoria, called out the militia without government assent to achieve their ends. The strike has long been understood as a watershed moment in the province?s industrial history. In this revealing chronicle, Geoff Meggs shows it was even more than that.

Other strikes in that era may have lasted longer, many were more violent, but none drew such diverse groups?Indigenous, Japanese, white?into an uneasy, short-term but effective coalition. While united by the common goal of economic equality, strikers were divided by forceful social pressures: First Nations fishermen wished to assert their Indigenous rights; Japanese fishermen, having fled poverty in their homeland, were seeking equality and opportunity in a new country; white fishermen were angered by the greed of the tiny clique of wealthy Vancouver industrialists who controlled the salmon industry. This maelstrom came together in Steveston, a ramshackle clapboard and cedar shake cannery boom town that blossomed into one of the province?s largest cities for a few hectic months each summer.

In this compelling account, told with journalistic flair and vivid detail, Meggs leaves no room for doubt: this event marked BC?s turn into the modern era, with lessons about inequality, racism, immigration and economic power that remain relevant today.