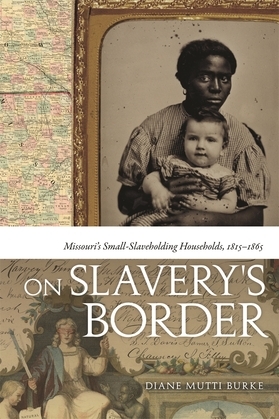 On Slavery’s Border is a bottom-up examination of how slavery and slaveholding were influenced by both the geography and the scale of the slaveholding enterprise. Missouri’s strategic access to important waterways made it a key site at the periphery of the Atlantic world. By the time of statehood in 1821, people were moving there in large numbers, especially from the upper South, hoping to replicate the slave society they’d left behind.

Diane Mutti Burke focuses on the Missouri counties located along the Mississippi and Missouri rivers to investigate small-scale slavery at the level of the household and neighborhood. She examines such topics as small slaveholders’ child-rearing and fiscal strategies, the economics of slavery, relations between slaves and owners, the challenges faced by slave families, sociability among enslaved and free Missourians within rural neighborhoods, and the disintegration of slavery during the Civil War. Mutti Burke argues that economic and social factors gave Missouri slavery an especially intimate quality. Owners directly oversaw their slaves and lived in close proximity with them, sometimes in the same building. White Missourians believed this made for a milder version of bondage. Some slaves, who expressed fear of being sold further south, seemed to agree.

Mutti Burke reveals, however, that while small slaveholding created some advantages for slaves, it also made them more vulnerable to abuse and interference in their personal lives. In a region with easy access to the free states, the perception that slavery was threatened spawned white anxiety, which frequently led to violent reassertions of supremacy.