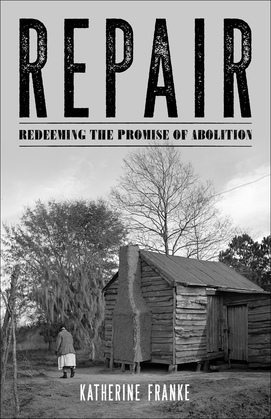 by Katherine Franke (Author)
Excerpt
Nonfiction Social science Slavery Discrimination & race relations History History by country United States Historical period Civil War period (1850-1877)
EPUB
Unlimited loans, One at a time
Details
A compelling case for reparations based on powerful, first-person accounts detailing both the horrors of slavery and past promises made to its survivors.

Katherine Franke makes a powerful case for reparations for Black Americans by amplifying the stories of formerly enslaved people and calling for repair of the damage caused by the legacy of American slavery. Repair invites readers to explore the historical context for reparations, offering a detailed account of the circumstances that surrounded the emancipation of enslaved Black people in two unique contexts, the Sea Islands of South Carolina and Davis Bend, Mississippi, Jefferson Davis’s former plantation. Through these two critical historical examples, Franke unpacks intergenerational, systemic racism and white privilege at the heart of American society and argues that reparations for slavery are necessary, overdue and possible.

“Essential . . . Franke engages the original debates concerning the conditions upon which newly freed Black people would rebuild their lives after slavery. Franke powerfully illustrates the repercussions of the unfilled promise of land redistribution and other broken promises that consigned African Americans to another one hundred years of second-class citizenship. Franke passionately argues that the continuation of those vast disparities between Black and white people in U.S. society—a product of slavery itself—means that the struggle for reparations remains a relevant demand in the current movements for racial justice.” —Keeanga-Yamahtta Taylor, author of From #BlackLivesMatter to Black Liberation

“Repair revisits the revolutionary era of Reconstruction . . . when the redistribution of land and wealth as recompense for unrequited toil could have secured genuine freedom for Black people rather than a future of racial inequality, exploitation, marginalization, and precarity . . . . Franke makes a persuasive case for reparations as at least a first step toward creating the conditions for genuine freedom and justice, not only for African Americans but for all of us.” —Robin D. G. Kelley, author of Freedom Dreams: The Black Radical Imagination

“Katherine Franke argues for a type of Black freedom that is material and felt—freedom that is more than a poetic nod to claims of American moral comeuppance. Repair . . . is a critical text for our times that demands an honest reckoning with the consequences, and afterlife, of the sin that was chattel enslavement. It is bold call for reparations and costly atonement.” —Darnell L. Moore, author of No Ashes in the Fire: Coming of Age Black & Free in America

“Katherine Franke is consistently one of the sharpest, most conscientious thinkers in progressive politics. In a time defined by crisis and conflict, Katherine is among that small number of thinkers whom I find indispensable.” —Jelani Cobb, New Yorker columnist and author of The Substance of Hope
Publication date
June 04, 2021
Publisher
Haymarket Books
Page count
213
ISBN
9781608466269
Paper ISBN
9781608466245
File size
4 MB