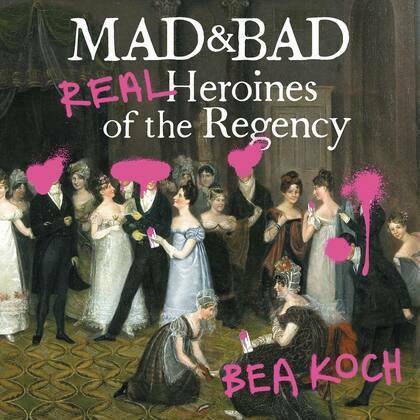 Discover a feminist pop history that looks beyond the Ton and Jane Austen to highlight the Regency women who succeeded on their own terms and were largely lost to history -- until now.

Regency England is a world immortalized by Jane Austen and Lord Byron in their beloved novels and poems. The popular image of the Regency continues to be mythologized by the hundreds of romance novels set in the period, which focus almost exclusively on wealthy, white, Christian members of the upper classes.
But there are hundreds of fascinating women who don't fit history books limited perception of what was historically accurate for early 19th century England. Women like Dido Elizabeth Belle, whose mother was a slave but was raised by her white father's family in England, Caroline Herschel, who acted as her brother's assistant as he hunted the heavens for comets, and ended up discovering eight on her own, Anne Lister, who lived on her own terms with her common-law wife at Shibden Hall, and Judith Montefiore, a Jewish woman who wrote the first English language Kosher cookbook.

As one of the owners of the successful romance-only bookstore The Ripped Bodice, Bea Koch has had a front row seat to controversies surrounding what is accepted as "historically accurate" for the wildly popular Regency period. Following in the popular footsteps of books like Ann Shen's Bad Girls Throughout History, Koch takes the Regency, one of the most loved and idealized historical time periods and a huge inspiration for American pop culture, and reveals the independent-minded, standard-breaking real historical women who lived life on their terms. She also examines broader questions of culture in chapters that focus on the LGBTQ and Jewish communities, the lives of women of color in the Regency, and women who broke barriers in fields like astronomy and paleontology. In Mad and Bad, we look beyond popular perception of the Regency into the even more vibrant, diverse, and fascinating historical truth.
Publication date
September 01, 2020
Publisher
Grand Central Publishing
ISBN
9781549123795
Paper ISBN
9781538701010