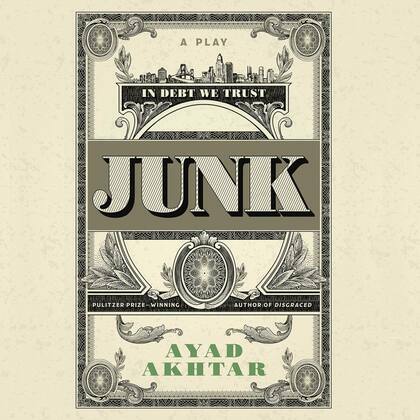 From the Pulitzer Prize-winning author of Disgraced, a fast-paced play that exposes the financial deal making behind the mergers and acquisitions boom of the 1980s.

Set in 1985, Junk tells the story of Robert Merkin, resident genius of the upstart investment firm Sacker Lowell. Hailed as "America's Alchemist," his proclamation that "debt is an asset" has propelled him to a dizzying level of success. By orchestrating the takeover of a massive steel manufacturer, Merkin intends to do the "deal of the decade," the one that will rewrite all the rules. Working on his broadest canvas to date, Pulitzer Prize winner Ayad Akhtar chronicles the lives of men and women engaged in financial civil war: insatiable investors, threatened workers, killer lawyers, skeptical journalists, and ambitious federal prosecutors. Although it's set 40 years in the past, this is a play about the world we live in right now; a world in which money became the only thing of real value.