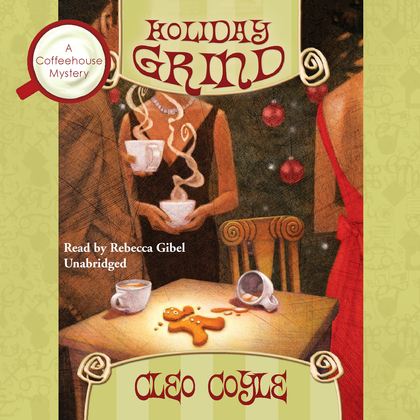 Clare’s grown very fond of Alfred Glockner, the part-time comic and genuinely jolly charity Santa who’s been using her coffeehouse as a place to warm his mittens. When she finds him gunned down in a nearby alley, a few subtle clues convince her that Alfred’s death was something more than the tragic result of a random mugging, despite the conclusions of the police. With Clare’s boyfriend, NYPD detective Mike Quinn, distracted by a cold case of his own, and ex-husband, Matt, “investigating” this year’s holiday lingerie catalogs, Clare charges ahead solo and discovers this Santa had a list that he was checking twice—and the folks on it were not very nice. Then someone tries to ice Clare, and she really gets steamed.

Between baking delicious Christmas goodies and fending off the attentions of a persistent professional elf, Clare sets out to solve St. Nick’s murder. But she’d better watch out, because if she fails to stop this stone-cold killer, she may just get the biggest chill of her life.