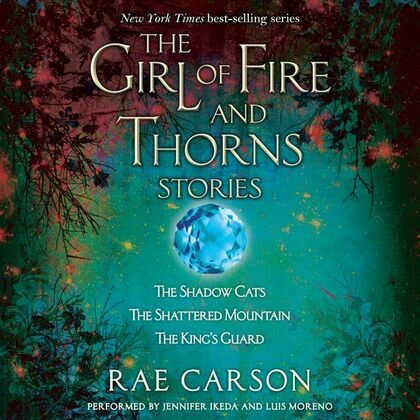 The Girl of Fire and Thorns Stories

by Rae Carson (Author), Jennifer Ikeda (Narrateur), Luis Moreno (Narrateur)
Excerpt
warning_amber
One or more licenses for this book have been acquired by your organisation details
AUDIOBOOK
Unlimited loans, One at a time
Details

"Rae Carson has proved she's a master and has shaken up the YA genre."—USAToday.com

Three novellas set within the world of Rae Carson's epic New York Times?bestselling Girl of Fire and Thorns series are available in one volume! The Shadow Cats, The Shattered Mountain, and The King's Guard each center around a character vital to Elisa, the heroine of The Girl of Fire and Thorns. It's a must-have for every fan of the stunning fantasy trilogy.

Before Hector became commander of the Royal Guard and Elisa's true love, he was a young new recruit. In The King's Guard, he must prove himself—and he discovers a secret that he must keep forever.

In The Shadow Cats, discover how Elisa and her older sister's rivalry looks from Alodia's point of view, and find out why Alodia agrees to marry her sister off to King Alejandro.

In The Shattered Mountain, find out what happened to Mara before she becomes Elisa's best friend and handmaiden. When her village is destroyed, she must lead the few young survivors to the safety of a hidden rebel camp.

Don’t miss The Empire of Dreams, Rae Carson’s action-packed return to the world of The Girl of Fire and Thorns!