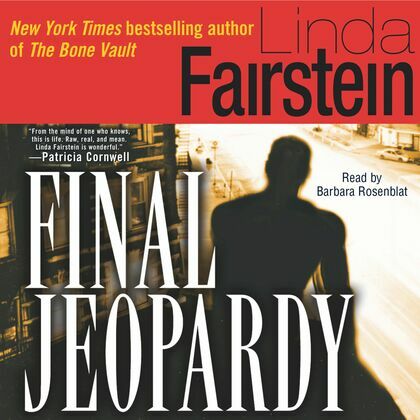 From the former chief of the sex crimes unit of the Manhattan District Attorney’s office comes the bestselling thriller featuring a New York City prosecutor unraveling a terrifying and brutal murder mystery.

Alexandra Cooper, Manhattan’s top sex crimes prosecutor, awakens one morning to shocking news: a tabloid headline announcing her own violent murder. Confused and horrified, Alex discovers that the actual victim was Isabella Lascar, a Hollywood film actress who was staying at Alex’s Martha’s Vineyard retreat. This only raises more questions: was Isabella slain by a stalker or was Alex herself the intended target?

In an investigation that twists from the alleys of lower Manhattan to the chic boutiques of the Upper East Side, Alex has to get inside the killer’s head before the killer gets to her. “With riveting authenticity” (Vanity Fair), Final Jeopardy is a fast-paced and explosive thriller that only Linda Fairstein could write.