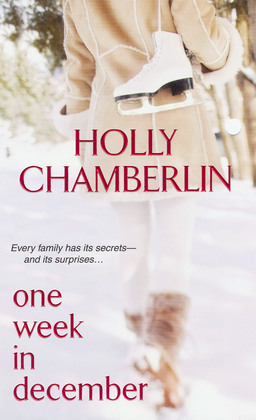 One Week In December

by Holly Chamberlin (Author)
Excerpt
Fiction Romance
warning_amber
One or more licenses for this book have been acquired by your organisation details
EPUB
Unlimited loans, One at a time
Details
A woman upends her family’s Christmas gathering in Maine when she reveals a stunning family secret . . .

In this compelling, heartfelt novel from the bestselling author of Tuscan Holiday and The Friends We Keep, a family reunited for the holidays explores the price of secrets, the power of regret, and the choices that can change everything . . .

The Rowans’ rambling Maine farmhouse is just big enough to contain the family members gathered there in the week before Christmas. Becca Rowan has driven north from Boston with one thought in mind—reclaiming the daughter she gave up when she was a frightened teenager. Raised by Becca’s older brother and his wife, Rain Rowan, now sixteen, has no idea she was adopted. And though Becca agreed not to reveal the truth until Rain turned twenty-one, lately that promise, along with all her career success, counts for little in the face of her loneliness and longing.

But while Becca anticipates shock at her announcement, she’s unprepared for the depth of her family’s reactions. Her brother is angry and fearful of losing the daughter he adores; her sister Olivia, oblivious to her crumbling marriage, reveals long-buried resentments, while Becca’s parents are torn between concern and guilt. And as the Rowans’ neighbor, Alex, draws her deeper into an unexpected friendship, Becca begins to challenge her own preconceptions about family, about love, and about the courage needed to live with—and sometimes change—the decisions we make . . .
Publication date
October 01, 2009
Publisher
Kensington Books
Page count
336
ISBN
9780758285157
Paper ISBN
9781617738210
332889
item