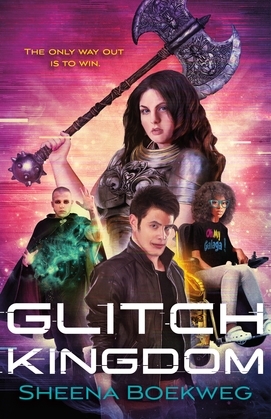 by Sheena Boekweg (Author)
Excerpt
warning_amber
One or more licenses for this book have been acquired by your organisation details
EPUB
Unlimited loans, 2 years, One at a time
Details

The teenage daughter of an executioner and the traitorous prince she can’t kill must reluctantly join forces to dethrone a paranoid queen after discovering they are trapped in a video game in Sheena Boekweg's fast-paced YA debut, Glitch Kingdom...

Ryo was the golden boy, the prankster prince, but with one stroke of a pen he has lost everything. Dagney and Grigfen were happy as minor members of the court, but when their father, the king's executioner, is branded a traitor, they each must deal in death in order to survive.. McKenna, queen of the enemy realm, has inherited a mission of conquest by assassination, but worries she's not up to the role.

But behind the crowns and masks hides a secret… All of these teens are actually players in the newest, shiniest, most immersive virtual reality video game, competing against each other for a highly coveted internship with a prestigious game developer.

But now this life-changing opportunity has suddenly become a deadly trap. A glitch in the software has locked the players inside the game, and they’ll need to escape before the fantasy world corrupts around them. The only way out is to win.