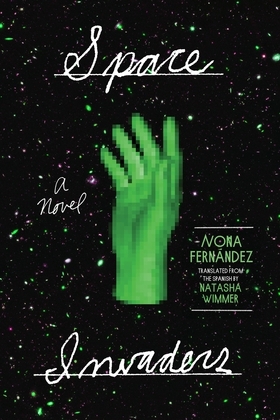 by Nona Fernández (Author), Natasha Wimmer (Translator)
Excerpt
Fiction Literary Hispanophone literature South American literature
warning_amber
One or more licenses for this book have been acquired by your organisation details
EPUB
Unlimited loans, 2 years, One at a time
Details

Space Invaders is the story of a group of childhood friends who, in adulthood, are preoccupied by uneasy memories and visions of their classmate Estrella González Jepsen. In their dreams, they catch glimpses of Estrella’s braids, hear echoes of her voice, and read old letters that eventually, mysteriously, stopped arriving. They recall regimented school assemblies, nationalistic class performances, and a trip to the beach. Soon it becomes clear that Estrella’s father was a ranking government officer implicated in the violent crimes of the Pinochet regime, and the question of what became of her after she left school haunts her erstwhile friends. Growing up, these friends—from her pen pal, Maldonado, to her crush, Riquelme—were old enough to sense the danger and tension that surrounded them, but were powerless in the face of it. They could control only the stories they told one another and the “ghostly green bullets” they fired in the video game they played obsessively.