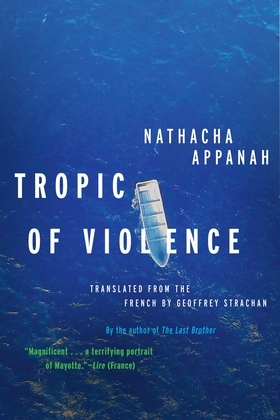 Marie, a nurse in Mayotte, a far-flung, tropical department of France in the Indian Ocean, adopts a baby abandoned at birth by his mother, a refugee from Comoros. She names him Moïse and raises him as her own?and she avoids his increasing questions about his origins as he grows up. When Marie suddenly dies, thirteen-year-old Moïse is left completely alone, plunged into uncertainty and turmoil. In a state of panic, he runs away from home, and sets himself on a collision course with the gangs of Gaza, the largest and most infamous slum on the island.

Nathacha Appanah has deftly assembled a small chorus of voices who narrate the heartbreak, violence, and injustice of life in Mayotte. To Marie?s and Moïse?s perspectives she adds those of Bruce, a terrifying gang leader; Olivier, a police officer fighting a losing battle; and Stéphane, the naïve aid worker whose efforts to help Moïse only make him more vulnerable.

Tropic of Violence shines a powerful light on the particular deprivation and isolation in this forgotten and neglected part of France. At the same time, it is a moving portrayal of the desperation and inequality that are driving refugee crises across the world, and of the innocent children whose lives are being torn apart in their wake. This is a remarkable, unsettling new novel from one of the most exciting voices in world literature.