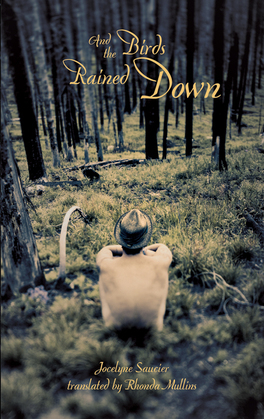 And the Birds Rained Down

An award-winning and haunting meditation on aging and self-determination.

A CBC Canada Reads 2015 Selection! Finalist for the 2013 Governor General's Literary Award for French-to-English Translation Deep in a Northern Ontario forest live Tom and Charlie, two octogenarians determined to live out the rest of their lives on their own terms: free of all ties and responsibilities, their only connection to civilization two pot farmers who bring them whatever they can't eke out for themselves. But their solitude is disrupted by the arrival of two women. The first is a photographer searching for survivors of a series of catastrophic fires nearly a century earlier; the second is an elderly escapee from a psychiatric institution. The little hideaway in the woods will never be the same. Originally published in French, And the Birds Rained Down, the recipient of several prestigious prizes, including the Prix de Cinq Continents de la Francophonie, is a haunting meditation on aging and self-determination.

'Nostalgic and beautifully grotesque, this novel is delightfully baroque and, although short, so striking it will simply never leave you.' —The Coast