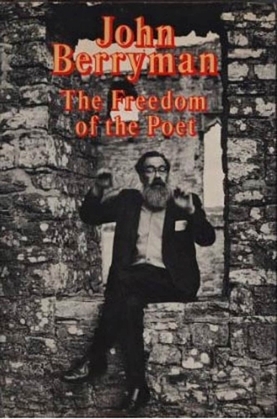 Freedom of the Poet

Less than a year before his death in 1972, John Berryman signed a contract with his publisher for a book of prose, The Freedom of the Poet, for which he had made a selection from his published and unpublished writings. In his draft of a prefatory note, he acknowledged the influence of Eliot, Blackmur, Pound, and Empson on his critical thought, pointing out that "my interest in critical theory has been slight," and concluding: "But I have also borne in mind throughout: remarks by Franz Kafka ('the story came out of me like a real birth, covered with slime and blood') and Joseph Conrad: 'All the great creations of literature have been symbolic, and in that way have gained in complexity, in power, in depth and in beauty.'"
There are thirty-six pieces in all, including not only such justly famous writings on Elizabethan figures as "Shakespeare at Thirty" and "Thomas Nashe and The Unfortunate Traveller" but also "Shakespeare's Last Word" and "Marlowe's Damnations," published for the first time; essays on American writers like Dreiser, Crane, James, Lardner, Fitzgerald, and Bellow, and on poets like Hardy, Pound, Ransom, Eliot, Thomas, Lowell, and Williams; unpublished essays on Cervantes, Whitman's "Song of Myself," Conrad, and Anne Frank; "Thursday Out," an account of a trip to India, and stories, published and unpublished, including "Wash Far Away," "The Lovers," "All Their Colours Exiled," and "The Imaginary Jew."
The poet's "freedom" in Berryman's definition is not license but escape, release--even death. The title piece--the second part of his essay on The Tempest--confirms this with his statement about Prospero: "This longing--for release, for freedom--...is neither disillusioned nor frightening. It is radiant and desirous."
This final book which John Berryman himself prepared exhibits his erudition and scholarship, his critical insight and empathy, and a first-rate poet's powerful prose.