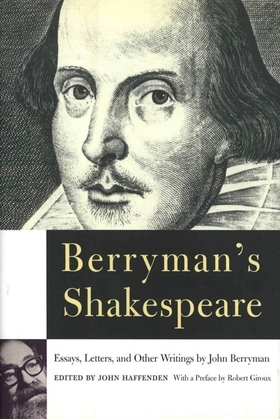 Edited by John Haffenden
With a Preface by Robert Giroux

John Berryman, one of America's most talented modern poets, was winner of the Pulitzer Prize for 77 Dream Songs and the National Book Award for His Toy, His Dream, His Rest. He gained a reputation as an innovator whose bold literary adventures were tempered by exacting discipline. Berryman was also an active, prolific, and perceptive critic whose own experience as a major poet served to his advantage.

Berryman was a protégé of Mark Van Doren, the great Shakespearean scholar, and the Bard's work remained one of his most abiding passions--he would devote a lifetime to writing about it. His voluminous writings on the subject have now been collected and edited by John Haffenden.