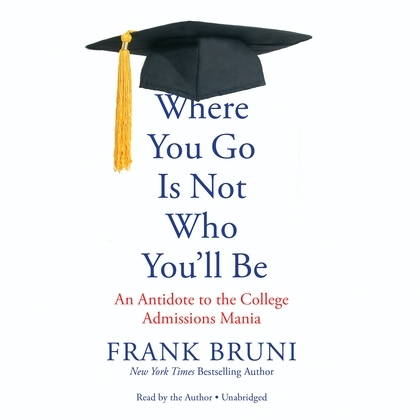 Where You Go Is Not Who You’ll Be

Year after year, high school seniors open rejection letters that destroy their confidence and lead them to believe they have failed at one of life?s most critical junctures?something that has happened in so many American households with college-bound kids. While there are countless books teaching people how to identify and get into the colleges of their dreams, there?s a deep need for dialogue questioning the intensity of those dreams, emphasizing that the college admissions moment isn?t the most important in a lifetime, illustrating that college is what a student makes of it, and exhorting people to look at it in a different, less status-oriented way.

Expanding on an April 2014 column titled, ?Our Crazy College Crossroads??which went viral, generated numerous emails to Bruni, and topped the ?most viewed? and ?most emailed? categories of the New York Times for days?Where You Go Is Not Who You?ll Be is the manifesto that puts the college admissions process into desperately needed perspective. It not only dissects the limited meaning of a rigged and sometimes random admissions process, it also discusses many of the hugely successful Americans who didn?t go to Ivy League schools. It sketches profiles of young adults who were denied their dream colleges but found that the schools where they ended up were perfect for them, making the case that the attitude with which a student approaches college matters more than the college itself. It presents data and expert opinions that question the advantages of diplomas from Ivy League schools (and their ilk) and looks at the abundance of fantastic schools?and fantastic programs?outside the few dozen elite institutions that parents focus relentlessly on. All the while, Bruni weaves in larger life lessons?that setbacks can be springboards, that the wisest course isn?t always the most obvious one?that make this book a corrective tool and a balm not just for high school graduates eyeing the horizon.

Where You Go Is Not Who You?ll Be serves as a thought-provoking antidote, an impassioned rallying cry, and a poignant retort to aspirational thinking.