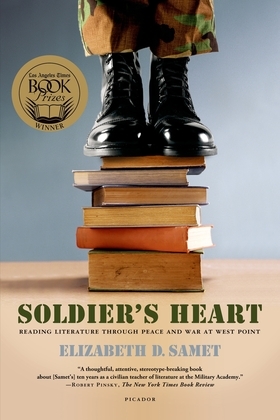 Elizabeth D. Samet and her students learned to romanticize the army "from the stories of their fathers and from the movies." For Samet, it was the old World War II movies she used to watch on TV, while her students grew up on Braveheart and Saving Private Ryan. Unlike their teacher, however, these students, cadets at the United States Military Academy at West Point, have decided to turn make-believe into real life.

West Point is a world away from Yale, where Samet attended graduate school and where nothing sufficiently prepared her for teaching literature to young men and women who were training to fight a war. Intimate and poignant, Soldier's Heart chronicles the various tensions inherent in that life as well as the ways in which war has transformed Samet's relationship to literature. Fighting in Iraq, Samet's former students share what books and movies mean to them?the poetry of Wallace Stevens, the fiction of Virginia Woolf and J. M. Coetzee, the epics of Homer, or the films of James Cagney. Their letters in turn prompt Samet to wonder exactly what she owes to cadets in the classroom.

Samet arrived at West Point before September 11, 2001, and has seen the academy change dramatically. In Soldier's Heart, she reads this transformation through her own experiences and those of her students. Forcefully examining what it means to be a civilian teaching literature at a military academy, Samet also considers the role of women in the army, the dangerous tides of religious and political zeal roiling the country, the uses of the call to patriotism, and the cult of sacrifice she believes is currently paralyzing national debate. Ultimately, Samet offers an honest and original reflection on the relationship between art and life.