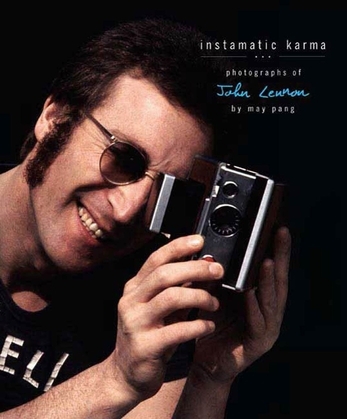 "There were times I was a bit reticent in taking out my camera, like when some 'old friends' stopped by to hang out. I didn't want to intrude on these moments, but John insisted. He felt that I captured him in ways that no one else did because of his comfort level with me...For years, only my closest friends got to see these photos-which were literally tucked away in a shoebox in my closet. They were surprised that these images did not convey the John that was portrayed in the press during our time together. In fact, they saw a side of John seldom seen."-From INSTAMATIC KARMA

John Lennon is the most famously photographed Beatle-everyone from Iain MacMillian to Annie Lebowitz took iconic images of him-but there have never been pictures of him like these taken by May Pang, Lennon's girlfriend from 1973 to 1975. In INSTAMATIC KARMA, they're collected for the first time. With very few exceptions, these photos are that rare thing: never-before-seen images of an icon. The photos here show Lennon in a variety of settings: at work, at play, at home, and away. They show a playful Lennon, a casual, unguarded Lennon; they're the kind of photos one lover takes of another. May has written rich captions to accompany her photos--taken together, they tell a simple story of the time May and Lennon spent together; a time, according to legend, when Lennon was unhappy and unproductive, estranged from his family and bandmates. Pang's photos clearly tell another story-they show Lennon clowning around, working on his hit album "Walls and Bridges", embracing old friends and family, hanging out in their apartment on Manhattan's East 52nd Street, relaxing in the country in upstate New York or spending peaceful days swimming in the waters of Long Island.

The photographs in INSTAMATIC KARMA are both color and black & white, casual Polaroids and more composed shots. Each one is an intimate glimpse into a fascinating time in John Lennon's life.