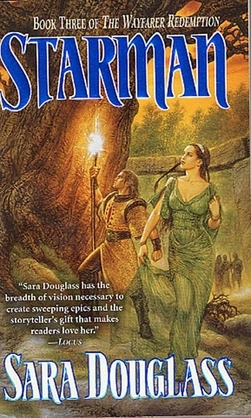 Axis is the StarMan of prophecy and legend, destined to lead the three races of his world to unite as one people. The people of his world all know the Prophecy of the Destroyer, despite the failed attempts of the Seneschal to suppress it in the name of the god Artor the Ploughman, and it predicts and dictates Axis's path through war and destruction to the creation of Tencendor.

The Prophecy foretold that Axis would defeat his half-brother and lay claim to the land that Tencendor will be created upon. The Prophecy told of the traitor in Axis's camp-Faraday's champion, Timozel.

And the Prophecy foretold many a choice that Axis must make in order to fulfill his destiny . . . but neglected to mention the choice between the beautiful and courageous Faraday, his late half-brother's wife, and the feisty and hauntingly enchanting Azhure.

To Faraday, he had pledged his love and a place by his side as ruler of Tencendor; to Azhure, he had given his children, his time, and his devotion.

His love for both women is what the last twist of the Prophecy relies on. While Azhure explores her newfound powers as an Icarii Enchantress, and Faraday replants the ancient forests of the Mother, the evil Gorgrael is plotting Axis's downfall, invading the sky with ice and terror and the flesh-hungry Gryphons. His most daring move is to follow prophecy, to taunt Axis with the pain of his beloved.

But which beloved woman will Gorgrael choose . . . and will she be the one whose death will distract Axis from saving the world?