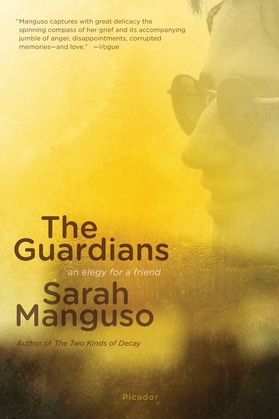 The Guardians opens with a story from the July 24, 2008, edition of the Riverdale Press that begins, "An unidentified white man was struck and instantly killed by a Metro-North train last night as it pulled into the station on West 254th Street." Sarah Manguso writes: "The train's engineer told the police that the man was alone and that he jumped. The police officers pulled the body from the track and found no identification. The train's 425 passengers were transferred to another train and delayed about twenty minutes."
The Guardians is an elegy for Manguso's friend Harris, two years after he escaped from a psychiatric hospital and jumped under that train. The narrative contemplates with unrelenting clarity their crowded postcollege apartment, Manguso's fellowship year in Rome, Harris's death and the year that followed?the year of mourning and the year of Manguso's marriage. As Harris is revealed both to the reader and to the narrator, the book becomes a monument to their intimacy and inability to express their love to each other properly, and to the reverberating effects of Harris's presence in and absence from Manguso's life. There is grief in the book but also humor, as Manguso marvels at the unexpected details that constitute a friendship. The Guardians explores the insufficiency of explanation and the necessity of the imagination in making sense of anything.