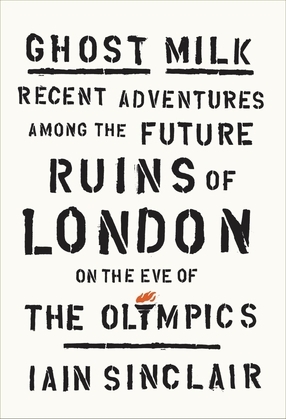 From "an astonishingly original and entertaining writer" (Michael Dirda, The Washington Post) and "our greatest guide to London" (The Spectator), an extraordinary book about a disappearing city

The Olympics, the story goes, have transformed London into a gleaming, wholly modern city. And East London?Olympic headquarters?is the city's new jewel, provider of unlimited opportunities and better tomorrows. The grime and poverty have been scrubbed away, and huge stadiums and grand public sculptures have taken their place.

The writer Iain Sinclair has lived in East London for four decades, and in Ghost Milk, he tells a very different story about his home: that of a neighborhood turned upside down, of stolen history. Long-beloved parks have vanished; police raids can occur at any time; and high-security exclusion zones?enforced by armed guards and hidden cameras?have steamrolled East London's open streets and public spaces. To prepare for the most public of events, everything has been privatized.

A call to arms against the politicians and public figures who have so doggedly preached the gospel of the Olympics, Ghost Milk is also a brilliant reflection on a changing landscape?and Sinclair's most personal book yet. In an attempt to understand what has happened to his beloved city, Sinclair travels farther afield: he walks along the Thames from the North Sea to Oxford; he rides the bus across northern England; he visits Athens and Berlin, Olympic sites of the recent and distant past.

Elegiac, intimate, and audacious, Ghost Milk is at once a powerful chronicle of memory and loss, in the tradition of W. G. Sebald and Roberto Bolaño, and a passionate interrogation of our embrace of progress at any cost.