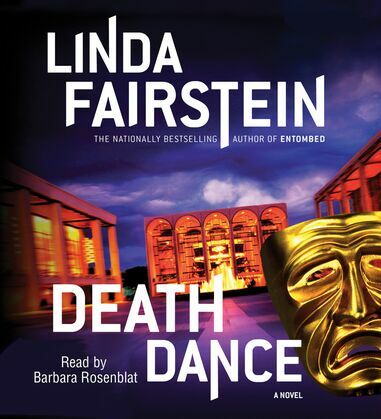 The three colleagues are soon drawn into the machinations of New York City's secretive theatrical community, where ambition takes many forms, including those most deadly. Among Galinova's lovers is Joe Berk, the colorful, strong-willed boss of the Berk Organization, one of four family companies that own all the legitimate theaters on Broadway. The aging ballerina was using Berk to help revive her career at the time of her disappearance.

Cooper, Chapman, and Wallace go underground and backstage at the Met, explore Berk's unusual apartment on top of the Belasco Theatre with its rumored ghostly resident, and then discover bizarre circumstances at City Center, which has a peculiar history not one of them knew about until now.

Within the glamorous but sordid inner sanctums of the Broadway elite, the team confronts the ruthless power brokers who control both the stars and the stages where they appear. They meet Joe's niece Mona Berk, who is mounting a vicious campaign to extract her share of the family fortune, and stunning starlet Lucy DeVore, whose beauty may be her fatal undoing. Chet Dobbis is the artistic director of the Metropolitan Opera, and therefore privy to the most scandalous exploits among its famous inhabitants. He also knows every inch of the labyrinthine building into which the ballerina disappeared...

Meanwhile, Alex is working on a very different case, using a creative technique to nab a physician who has been drugging women in order to assault them. As Dr. Selim Sengor eludes capture, Alex must navigate the new investigative world of DFSA -- drug-facilitated sexual assault -- intent on proving him guilty.

Complicating her quest is the explosive legal and ethical dilemma of using the existing DNA databank to solve new cases. Can Alex convince a judge to let her prosecute a man for a violent crime using DNA that was collected for a prior case in which he was never charged? Or do the suspect's civil rights prevent law enforcement from keeping his DNA on file to be used against him at any future time?

Death Dance is a spellbinding thriller combining a former prosecutor's fresh insight into hot-button legal issues with the unique history and spectacle of New York theater, and its shocking twists make this novel Linda Fairstein's most chilling adventure yet.