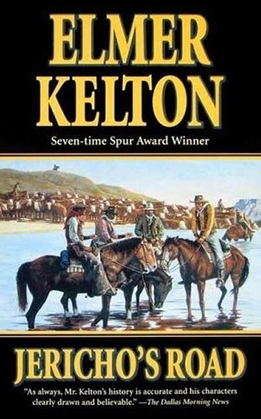 When Texas Ranger private Andy Pickard is assigned to help patrol the Texas-Mexico border country he rides directly into a deadly feud. At odds are two land and cattle barons - Jericho Jackson, whose great spread lies just north of the Rio Grande, and Guadalupe Chavez, whose domain lies south of the river.
The men are alike in only one respect: their hatred for each other, a hate born at the time of the Alamo and the U.S.-Mexican War, when Mexican lands were confiscated by ruthless Americans. The old rivals have turned to preying on each others' cattle with resulting bloodshed on both sides of the river.
Between the two camps, Big Jim McCawley's ranch seems almost symbolic of the opportunity for the people of the two nations to live together. McCawley is married to Guadalupe Chavez's sister, Juana -a fact that does not ingratiate him to either the Chavez or Jackson faction.
To Andy Pickard, who as a child was taken captive by Comanches, old prejudices are familiar territory, but the Jackson-Chavez war is flaring out of control by the time he reaches the Ranger camp on the border in the company of fellow Ranger Farley Brackett. The two Rangers find themselves caught up in the feud, risking arrest for crossing the river into Mexico, and risking death for not heeding the warning sign at the edge of Jericho Jackson's domain: This is Jericho's Road. Take the Other.
Inevitably, the cauldron boils over and the forces of Jericho Jackson and "Lupe" Chavez meet in bloody combat. In the midst of this battle on Mexican soil are Andy Pickard -- longing to court and marry Bethel Brackett and live a peaceful life as an ex-Ranger -- and Brackett himself, falling in love with Teresa, Big Jim McCawley's half-Mexican daughter.
Jericho's Road, sixth book in Kelton's acclaimed Texas Ranger series, typifies "The right blend of action, drama, romance, humor and suspense" that Publishers Weekly said has made Kelton "a master of both plot and character development."