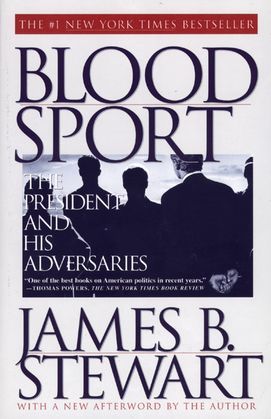 Blood Sport: The Truth Behind the Scandals in the Clinton White House

Pulitzer Prize winner James B. Stewart takes readers behind the scenes in the Clinton White House as it reels in the wake of the Whitewater scandal, Vincent Foster?s suicide, and Paula Jones? allegations of sexual misconduct.

Nine days later, Foster was dead. Shock at the apparent suicide of one of President Clinton?s top aides turned to mystery, then suspicion, as the White House became engulfed in an ever-widening net of unanswered questions. Among the confidential matters Foster was working on when he died was the Clinton?s ill-fated investment in Whitewater, an Arkansas land development. Soon conspiracy theories were circulating, alleging that Foster was murdered because he knew too much. And the Whitewater affair, a minor footnote to the 1992 presidential campaign, was suddenly resurrected in the national media. To a degree that left them sunned and at times depressed, the president and the first lady have been buffeted by a succession of scandals, from the first lady's profitable commodities trading to the sexual harassment allegations of Paula Jones. Like his predecessors, the Clinton presidency son found itself engulfed in allegations of scandal, conspiracy, and cover-up.

Drawing on hundreds of interviews, many with people speaking publicly for the first time, James B. Stewart also sheds startling new light on these and other mysteries of the Clinton White House. In a fast-paced narrative that ranges from a backwater town in the Ozarks to the Oval Office, from newsrooms in New York and Los Angeles to offices of conservative think tanks and special prosecutors, the result is an unprecedented portrait of political combat as it is waged in America today.