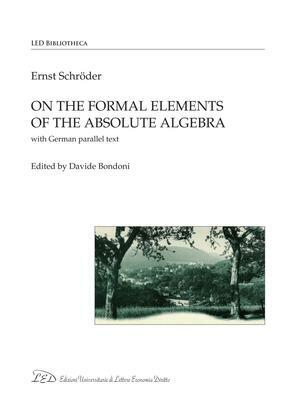 On the Formal Elements of the Absolute Algebra

This book is the first worldwide English translation of Schröder’s «Über die formalen Elemente der absoluten Algebra» (1874), a text as epiphanic as unknown to the general non German reader. Occasioned like a simple support for the students of the Gymnasium in Baden-Baden, this text is indeed the pivot of all Schröder’s activity in mathematics and logic which culminates in a formal algebra of connections whose elements are spoiled of any sort of (semantic) meaning. As a matter of fact, Schröder’s theory of relations arose in the broader context to build up a mathematical and formal structure in which only the relations among the elements are to survive. Given the formal character of this structure, one can search for possible interpretations of it. As easily seen, we are not so far from a naive modern model theory. Furthermore, this booklet marks the passage in Schröder’s investigations from a purely mathematical engagement to a logical-mathematical one. From this point of view, the calculus of relations is only a possible interpretation of a more general discipline (a universal algebra) and not a topic in itself. Schröder was and remained until his death a pure mathematician who used logic as a temporary tool to dig in the concept of absolute algebra, his authentic vocation (as he himself admitted one year before dying).