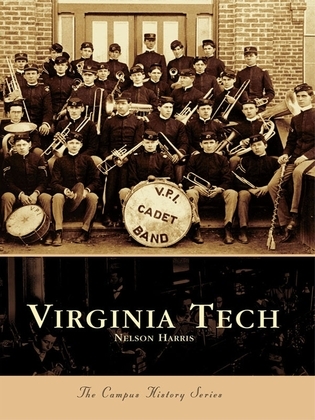 130 years after its opening, the once small agricultural college has become Virginia's largest university- Virginia Polytechnic Institute and State University.

When Charles Minor opened the doors of his new land-grant institution in late 1872, there were only 29 students, 3 faculty members, and a single building in the town of Blacksburg, Virginia. From the humble beginning of donated livestock, seeds, machinery, and books, the university now known as Virginia Tech has emerged as a leading research university that is consistently ranked among the nation's best colleges. In addition to housing some of the top engineering and business schools, the university also has a tremendous athletic program that continually produces many of the nation's top ranked athletes. The Campus History Series: Virginia Tech illustrates the university's evolution through over 200 archival photographs, including rare and fun bites of campus history, such as the old cadet rat parades, the first ring dance, the Highty-Tighties, the Huckleberry, and even the evolution of the school's mascot, the Hokie Bird.