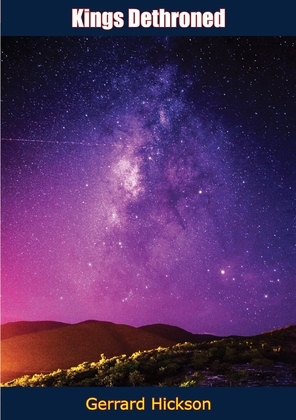 At the turn of the twentieth century, Gerrard Hickson stumbled upon a discovery which convinced him of something shocking. The giants of astronomy had miscalculated the distance of the sun from the Earth, it was closer than we ever thought. The popular estimate of approximately ninety-three million miles appeared to be a mistake, as inconceivable as it seemed.

Hickson pored through the methods that his predecessors had used to calculate the distance and the accounts of their work, searching for the means to disprove his theory but instead he found a mistake in Dr. Hailey?s diurnal method. Invented by Hailey in the nineteenth century and used as a basis for many other calculations about our solar system.

We can only imagine that Hickson must have gritted his teeth when he set himself the challenge of proving Dr. Hailey?s error. Kings Dethroned is the result of his research, and through his retracing of the steps of astronomers from the Roman Empire all the way up to the present day, we can see an accurate representation of the planets and our sun.

Gerrard Hickson, unlike his predecessors, took his findings to the general public and published this book for the consumption of all. Having been rejected or ignored by experts and scientific societies across the western world, he chose to trust in the public. He felt that the truth and his discovery were the wealth of the whole human species and in this modern age it does the reader only good to contemplate the necessity of constant and honest scientific enquiry.