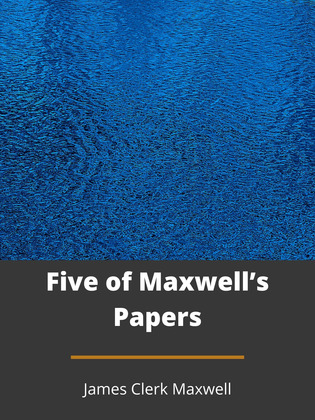 Five of Maxwell's Papers is a classic collection of physics papers by James Clerk Maxwell. Contents: On the unequal sensibility of the Foramen Centrale to light of different colours -- On the theory of compound colours with reference to mixtures of blue and yellow light -- On an instrument to illustrate Poinsot's theory of rotation -- Address to the Mathematical and Physical Sections of the British Association -- Introductory lecture on experimental physics. James Clerk Maxwell FRS FRSE (13 June 1831 – 5 November 1879) was a Scottish scientist in the field of mathematical physics. His most notable achievement was to formulate the classical theory of electromagnetic radiation, bringing together for the first time electricity, magnetism, and light as different manifestations of the same phenomenon. Maxwell's equations for electromagnetism have been called the "second great unification in physics" after the first one realised by Isaac Newton. With the publication of "A Dynamical Theory of the Electromagnetic Field" in 1865, Maxwell demonstrated that electric and magnetic fields travel through space as waves moving at the speed of light. Maxwell proposed that light is an undulation in the same medium that is the cause of electric and magnetic phenomena. The unification of light and electrical phenomena led to the prediction of the existence of radio waves. Maxwell helped develop the Maxwell–Boltzmann distribution, a statistical means of describing aspects of the kinetic theory of gases. He is also known for presenting the first durable colour photograph in 1861 and for his foundational work on analysing the rigidity of rod-and-joint frameworks (trusses) like those in many bridges. His discoveries helped usher in the era of modern physics, laying the foundation for such fields as special relativity and quantum mechanics. Many physicists regard Maxwell as the 19th-century scientist having the greatest influence on 20th-century physics. His contributions to the science are considered by many to be of the same magnitude as those of Isaac Newton and Albert Einstein. In the millennium poll – a survey of the 100 most prominent physicists – Maxwell was voted the third greatest physicist of all time, behind only Newton and Einstein.[8] On the centenary of Maxwell's birthday, Einstein described Maxwell's work as the "most profound and the most fruitful that physics has experienced since the time of Newton. James Clerk Maxwell was born on 13 June 1831 at 14 India Street, Edinburgh, to John Clerk Maxwell of Middlebie, an advocate, and Frances Cay daughter of Robert Hodshon Cay and sister of John Cay. (His birthplace now houses a museum operated by the James Clerk Maxwell Foundation.) His father was a man of comfortable means of the Clerk family of Penicuik, holders of the baronetcy of Clerk of Penicuik. His father's brother was the 6th Baronet. He had been born "John Clerk", adding the surname Maxwell to his own after he inherited (as an infant in 1793) the Middlebie country estate near Corsock, Kirkcudbrightshire, from connections to the Maxwell family, themselves members of the peerage. James was a first cousin of both the artist Jemima Blackburn (the daughter of his father's sister) and the civil engineer William Dyce Cay (the son of his mother's brother). Cay and Maxwell were close friends and Cay acted as his best man when Maxwell married. Maxwell's parents met and married when they were well into their thirties; his mother was nearly 40 when he was born. They had had one earlier child, a daughter named Elizabeth, who died in infancy.