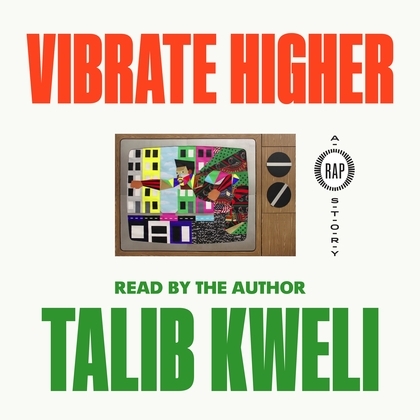 This program is read by the author.

From one of the most lyrically gifted, socially conscious rappers of the past twenty years, Vibrate Higher is a firsthand account of hip-hop as a political force

Before Talib Kweli became a world-renowned hip hop artist, he was a Brooklyn kid who liked to cut class, spit rhymes, and wander the streets of Greenwich Village with a motley crew of artists, rappers, and DJs who found hip hop more inspiring than their textbooks (much to the chagrin of the educator parents who had given their son an Afrocentric name in hope of securing for him a more traditional sense of pride and purpose). Kweli’s was the first generation to grow up with hip hop as established culture—a genre of music that has expanded to include its own pantheon of heroes, rich history and politics, and distinct worldview.

Eventually, childhood friendships turned into collaborations and Kweli gained notoriety as a rapper in his own right. From collaborating with some of hip hop’s greatest—including Mos Def, Common, Kanye West, Pharrell Williams, and Kendrick Lamar—to selling books out of the oldest African-American bookstore in Brooklyn, and ultimately leaving his record label and taking control of his own recording career, Kweli tells the winding, always compelling story of the people and events that shaped his own life as well as the culture of hip hop which informs American culture at large.

Vibrate Higher illuminates Talib Kweli’s upbringing and artistic success, but so too does it give life to hip hop as a political force—one that galvanized the Movement for Black Lives, and serves a continual channel for resistance against the rising tide of white nationalism.

A Macmillan Audio production from Farrar, Straus and Giroux