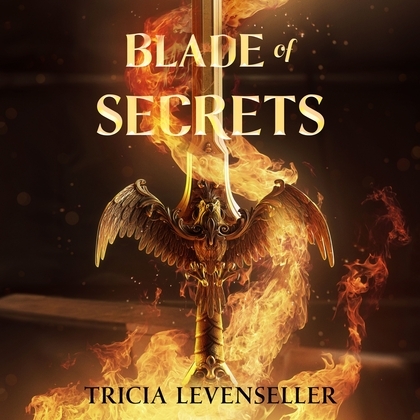 "Emily Ellet offers an unflinching and elegant performance of this audiobook...Ellet's vocal versatility and steady pace capture several characters seamlessly while guiding listeners through budding romance, anxiety attacks, and the steadfast strength of a character who proves herself even at her worst." -- AudioFile Magazine

In Blade of Secrets, the first audiobook in Tricia Levenseller's exciting new YA fantasy duology, a teenage blacksmith with social anxiety is forced to go on the run to protect the world from the most powerful magical sword she's ever made.

Eighteen-year-old Ziva prefers metal to people. She spends her days tucked away in her forge, safe from society and the anxiety it causes her, using her magical gift to craft unique weapons imbued with power.

Then Ziva receives a commission from a powerful warlord, and the result is a sword capable of stealing its victims secrets. A sword that can cut far deeper than the length of its blade. A sword with the strength to topple kingdoms. When Ziva learns of the warlord’s intentions to use the weapon to enslave all the world under her rule, she takes her sister and flees.

Joined by a distractingly handsome mercenary and a young scholar with extensive knowledge of the world’s known magics, Ziva and her sister set out on a quest to keep the sword safe until they can find a worthy wielder or a way to destroy it entirely.