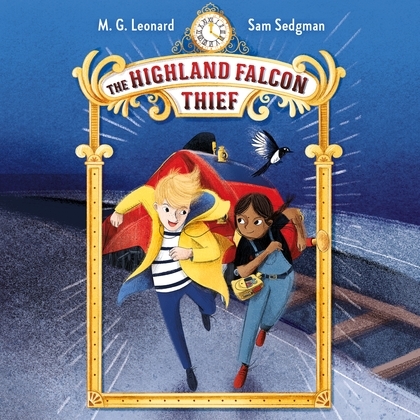 In The Highland Falcon Thief: Adventures on Trains #1, a middle-grade series starter from MG Leonard and Sam Sedgman, a young boy is swept up in an investigation to uncover the perpetrator of a jewel theft.

This program includes an author's note read by the authors

When eleven-year-old Harrison "Hal" Beck is forced to accompany his travel-writer uncle on the last journey of a royal train, he expects a boring trip spent away from video games and children his age.

But then Hal spots a girl who should not be on board, and he quickly makes friends with the stowaway, Lenny. Things get even more interesting when the royal prince and princess board for the last leg of the journey—because the princess's diamond necklace is soon stolen and replaced with a fake! Suspicion falls on the one person who isn't supposed to be there: Lenny.

It's up to Hal, his keen observation, and his skill as a budding sketch artist to uncover the real jewel thief, clear his friend's name, and return the diamond necklace before The Highland Falcon makes its last stop.