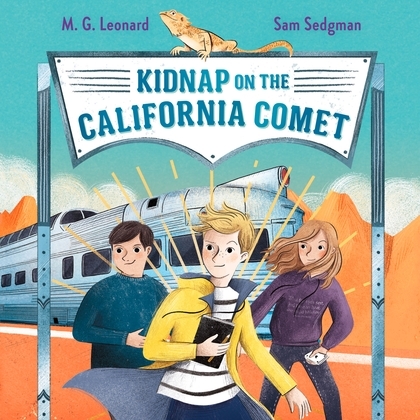 Kidnap on the California Comet: Adventures on Trains #2

In this second audiobook of the middle-grade Adventures on Trains series, amateur sleuth Hal Beck travels to the U.S. with his uncle to ride a famous train—the California Comet—and stumbles on a new mystery to solve, in M.G. Leonard and Sam Sedgman's Kidnap on the California Comet...

After his adventure on the Highland Falcon, amateur sleuth Hal Beck is excited to embark on another journey with his journalist uncle. This time, they're set to ride the historic California Comet from Chicago to San Francisco.

Hal mostly keeps to himself on the trip, feeling homesick and out of place in America. But he soon finds himself drawn into another mystery when the young daughter of a billionaire tech entrepreneur goes missing!

Along with new friends—spunky 13-year-old Mason and his younger sister, Hadley—Hal races against the clock to find the missing girl before the California Comet reaches its final destination.