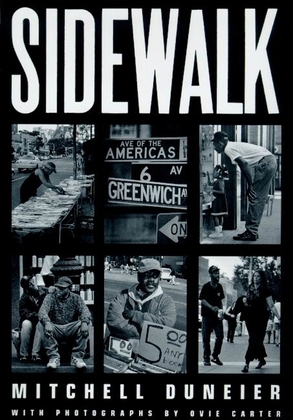 An exceptional ethnography marked by clarity and candor, Sidewalk takes us into the socio-cultural environment of those who, though often seen as threatening or unseemly, work day after day on "the blocks" of one of New York's most diverse neighborhoods. Sociologist Duneier, author of Slim's Table, offers an accessible and compelling group portrait of several poor black men who make their livelihoods on the sidewalks of Greenwich Village selling secondhand goods, panhandling, and scavenging books and magazines.

Duneier spent five years with these individuals, and in Sidewalk he argues that, contrary to the opinion of various city officials, they actually contribute significantly to the order and well-being of the Village. An important study of the heart and mind of the street, Sidewalk also features an insightful afterword by longtime book vendor Hakim Hasan. This fascinating study reveals today's urban life in all its complexity: its vitality, its conflicts about class and race, and its surprising opportunities for empathy among strangers.

Sidewalk is an excellent supplementary text for a range of courses:

INTRODUCTION TO SOCIOLOGY: Shows how to make important links between micro and macro; how a research project works; how sociology can transform common sense.

RACE AND ETHNIC RELATIONS: Untangles race, class, and gender as they work together on the street.

URBAN STUDIES: Asks how public space is used and contested by men and women, blacks and whites, rich and poor, and how street life and political economy interact.

DEVIANCE: Looks at labeling processes in treatment of the homeless;
interrogates the "broken windows" theory of policing.

LAW AND SOCIETY: Closely examines the connections between formal and informal systems of social control.

CULTURAL ANTHROPOLOGY: Sidewalk engages the rich terrain of recent developments regarding representation, writing, and authority; in the tradition of Elliot Liebow and Ulf Hannerz, it deals with age old problems of the social and cultural experience of inequality; this is a telling study of culture on the margins of American society.

CULTURAL STUDIES: Breaking down disciplinary boundaries, Sidewalk shows how books and magazines are received and interpreted in discussions among working-class people on the sidewalk; it shows how cultural knowledge is deployed by vendors and scavengers to generate subsistence in public space.

SOCIOLOGY OF CULTURE: Sidewalk demonstrates the connections between culture and human agency and innovation; it interrogates distinctions between legitimate subcultures and deviant collectivities; it illustrates conflicts over cultural diversity in public space; and, ultimately, it shows how conflicts over meaning are central to social life.