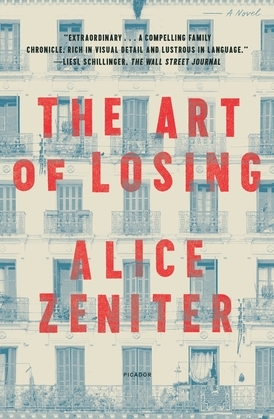 The Art of Losing

by Alice Zeniter (Author), Frank Wynne (Translator)
Excerpt
Fiction Literary Francophone literature
warning_amber
One or more licenses for this book have been acquired by your organisation details
EPUB
Unlimited loans, 2 years, One at a time
Details

Across three generations, three wars, two continents, and the mythic waters of the Mediterranean, one family’s history leads to an inevitable question: What price do our descendants pay for the choices that we make?

Naïma knows Algeria only by the artifacts she encounters in her grandparents’ tiny apartment in Normandy: the language her grandmother speaks but Naïma can’t understand, the food her grandmother cooks, and the precious things her grandmother carried when they fled. Naïma’s father claims to remember nothing; he has made himself French. Her grandfather died before he could tell her his side of the story. But now Naïma will travel to Algeria to see for herself what was left behind—including their secrets.

The Algerian War for Independence sent Naïma’s grandfather on a journey of his own, from wealthy olive grove owner and respected veteran of the First World War, to refugee spurned as a harki by his fellow Algerians in the transit camps of southern France, to immigrant barely scratching out a living in the north. The long battle against colonial rule broke apart communities, opened deep rifts within families, and saw the whims of those in even temporary power instantly overturn the lives of ordinary people. Where does Naïma’s family fit into this history? How do they fit into France’s future?

Alice Zeniter’s The Art of Losing is a powerful, moving family novel that spans three generations across seventy years and two shores of the Mediterranean Sea. It is a resonant people’s history of Algeria and its diaspora. It is a story of how we carry on in the face of loss: loss of country, identity, language, connection. Most of all, it is an immersive, riveting excavation of the inescapable legacies of colonialism, immigration, family, and war.