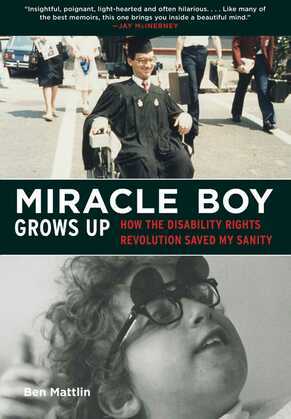 An NPR commentator’s memoir of surviving, and thriving, against all odds with spinal muscular atrophy.

Ben Mattlin lives a normal, independent life. Why is that interesting? Because Mattlin was born with spinal muscular atrophy, a congenital muscle weakness from which he was expected to die in childhood. Not only did Mattlin survive, he became one of the first students in a wheelchair to attend Harvard, and went on to a career as a professional writer, contributing to publications from the New York Times and the Washington Post to Financial Advisor magazine, in addition to becoming a husband and father.

Perhaps most important to his success, Mattlin’s life happened to parallel the growth of the disability rights movement—so that in many ways he did not feel he was disadvantaged at all, but merely different. In this witty, unsentimental memoir, he reveals his own experiences, as well as the larger story of those living with disabilities in the United States—with engrossing intelligence and “a unique perspective” (Library Journal).

“Insightful, poignant, light-hearted and often hilarious . . . Like many of the best memoirs, this one brings you inside a beautiful mind.” —Jay McInerney, author of Bright Lights, Big City

“Mattlin is candid about his challenges (e.g. finding a job, hiring attendants) but he isn’t looking for pity, just understanding. . . . Those who do pick up this memoir will find a unique perspective that compares with Harriet McBryde Johnson’s Too Late to Die Young.” —Library Journal