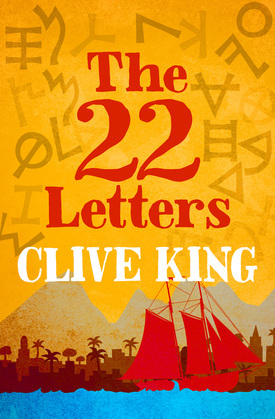 Three brothers embark on daring journeys in this epic of high adventure that reimagines the origins of monumental discoveries in ancient history.

Afraid that Aleph may have taught his sister, Beth, the priestly writing, his father sends him to climb the mountain as punishment. But Aleph couldn’t teach Beth the sacred writing even if he tried—there are so many symbols, and he just can’t seem to learn them. Instead, he and Beth have invented a new way of writing with only twenty-two letters. But his father won’t hear it, and so Aleph must go up the mountain to count the felled trees at the lumber camp.

Near the top of the mountain, however, Aleph discovers that all is not as it should be: The camp is empty! Curious, he sets off to find the loggers, never suspecting that the writing game he played with his sister will become invaluable, nor that his search will take him much farther than the mountaintop.

Meanwhile, Aleph’s two older brothers are on journeys of their own. Zayin, the eldest and a general in their city-state Gebal’s small army, is on a quest to find monsters in the Valley of the Centaurs. Nun, the second son, aims for the sea and the Court of Minos.

Then, grave news sends all three brothers hurrying home to protect their small city. But something even more disastrous looms on the horizon . . .

From beloved children’s author Clive King (Stig of the Dump), The 22 Letters is an epic tale of three great advances in history, told through the adventures of four young siblings.