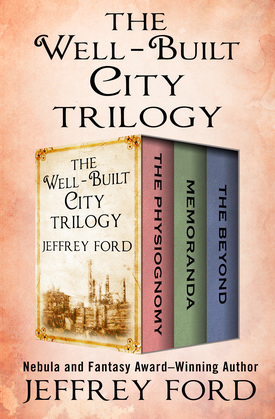 by Jeffrey Ford (Author)
Excerpt
Fiction Fantasy Historical
EPUB
Unlimited loans, One at a time
Details
An epic masterwork about the trials of a man of “science” in a Kafkaesque realm of persecution and paranoia from a World Fantasy Award–winning author.

The Well-Built City is a hellish place of unrelenting nightmare, ruled with cruelty, oppression, and terror by the inscrutable madman Drachton Below. In his multiple-award-winning, New York Times Notable trilogy, Jeffrey Ford creates a dystopia that chronicles the hubris, downfall, and damnation of a highly placed functionary responsible for determining who will live or die according to their facial structure.

The Physiognomy: With his unimpeachable authority to condemn and destroy, the pompous, drug-addicted Cley is one of the most feared civil servants in Drachton Below’s Well-Built City. But when the Master himself dispatches him to a remote mining town to recover a stolen object of unimaginable power, events will cause the physiognomist to doubt his science and the reality of his world.

Memoranda: Exiled in the wilderness, Cley’s newfound peace is shattered when his village is struck with a terrible sleeping sickness. Joining forces with Drachton Below’s demon son, Misrix, the former physiognomist must reenter the now-ruined city to find a cure hidden in the insane labyrinth of the Master’s mind.

The Beyond: On a journey chronicled by the half-demon Misrix, one-time physiognomist Cley travels deep into a mysterious and dangerous Beyond to face untold terrors as he attempts to right an unspeakable wrong.
Publication date
October 03, 2017
Publisher
Open Road Media Sci-Fi & Fantasy
Collection
The Well-Built City Trilogy
Page count
750
ISBN
9781504048309
File size
4 MB