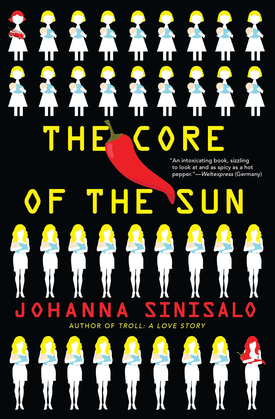 The Core of the Sun

The Finnish author of Troll: A Love Story delivers a work of “scathing satire . . . that sits somewhere between Margaret Atwood and Kurt Vonnegut” (NPR).

The Core of the Sun further cements Finlandia Award–winning author Johanna Sinisalo’s reputation as a master of literary speculative fiction and of her country’s unique take on it, dubbed “Finnish weird.”

In an alternative historical present, The Eusistocratic Republic of Finland has bred a new human sub-species of receptive, submissive women, called eloi, for sex and procreation, while intelligent, independent women are relegated to menial labor and sterilized so that they do not carry on their “defective” line. Vanna, raised as an eloi but secretly intelligent, needs money to find her sister, who has disappeared. Vanna forms a friendship with a man named Jare, and they become involved in buying and selling a stimulant known to the Health Authority to be extremely dangerous: chili peppers. Then Jare comes across a strange religious cult in possession of the Core of the Sun, a chili so hot that it is rumored to cause hallucinations—a temptation so enticing that it just might divert the addicted Vanna from her quest . . .

“A chilling tale reminiscent of Margaret Atwood’s The Handmaid’s Tale . . . A fascinating story centered on gender politics.” —The Washington Post