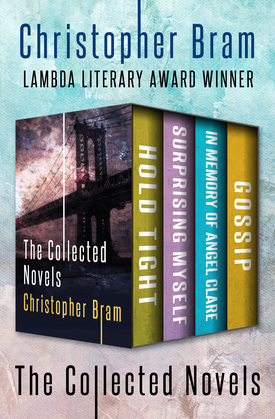 by Christopher Bram (Author)
Excerpt
Fiction LGBTQ+
EPUB
Unlimited loans, One at a time
Details
Four novels dealing with a broad range of gay experience—from the “gifted” author of Gods and Monsters, the basis for the Academy Award–winning film (The Advocate).

Whether Christopher Bram is writing about the director of Frankenstein in Gods and Monsters or the characters in the four novels collected here—a sailor who goes undercover in a gay brothel to catch Nazis, a teen coming into his sexual awakening, a group of Manhattanites dealing with a friend lost to AIDs, and a bookstore owner accused of murdering his conservative Republican lover—“what is most impressive in Bram’s fiction is the psychological and emotional accuracy with which he portrays his characters . . . His novels are about ordinary gay people trying to be decent and good in a morally compromised world. He focuses on the often conflicting claims of friendship, family, love and desire; the ways good intentions can become confused and thwarted; and the ways we learn to be vulnerable and human” (Philip Gambone).

Hold Tight: In “a spy thriller that breaks new ground” set during World War II, Navy sailor Hank Fayette visits a gay brothel in New York City only to be arrested during a raid (Kirkus Reviews). Facing a dishonorable discharge—or worse—he is given another option: return to the brothel, near Manhattan’s West Side piers, and work undercover as a prostitute to trap Nazi spies.

Surprising Myself: In Bram’s “superb” debut novel, seventeen-year-old Joel is spending the summer at a Boy Scouts camp in the United States after four years of living with relatives in Switzerland (Booklist). There he meets nineteen-year-old Corey, a fellow counselor who’s the only person Joel wants to be with. Soon, Joel’s distant CIA father shows up and whisks him away to live on a farm in Virginia. But everything changes when Corey returns to his life, bringing with him the discovery and excitement of reciprocal love.

In Memory of Angel Clare: A year after the AIDS-related death of filmmaker Clarence Laird—known to friends as Angel Clare—his young boyfriend, Michael, is still deep in mourning. Clarence’s older, sophisticated friends—male and female, gay and straight—find themselves the reluctant custodians of Michael, a callow kid they never liked much to begin with. What follows is a dark, intimate comedy about real grief and false grief, misunderstanding, friendship, love, and forgiveness.

“Bram’s characters are candidly, truthfully observed. . . . It is the common humanity of these Manhattan sophisticates that triumphs quietly in a surprising, dramatic climax.” —Publishers Weekly

Gossip: Ralph Eckhart, a bookstore manager and gay activist in the East Village, meets Bill O’Connor online and they agree to get together during Ralph’s weekend visit to Washington, DC. The two start a heated, long-distance sexual relationship. But Ralph discovers that Bill is a closeted Republican journalist, whose new book trashes liberal women in Washington—including Ralph’s speechwriter friend, Nancy—and angrily breaks off the affair. When Bill is found murdered, Ralph becomes the prime suspect in this complex psychological and political thriller.