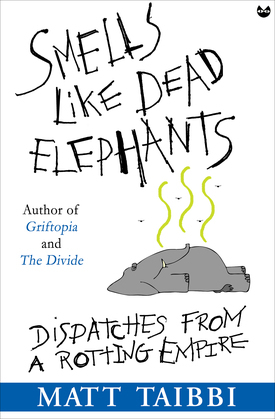 Dispatches from a Rotting Empire
by Matt Taibbi (Author)
Excerpt
Nonfiction Human science Language arts & disciplines Journalism
warning_amber
One or more licenses for this book have been acquired by your organisation details
EPUB
Unlimited loans, One at a time
Details

From “the only political writer in America that matters” comes a collection of his best reportage about the worst of times (Harford Advocate).

Matt Taibbi is notorious as a journalistic agitator, a stone thrower, a “natural provocateur” (Salon.com). Now, bringing together his most incisive, intense, and hilarious pieces from his “Road Work” column in Rolling Stone, the “political reporter with the gonzo spirit that made Hunter S. Thompson and P. J. O’Rourke so much fun” shines a scathing spotlight on the corruption, dishonesty, and sheer laziness of our leaders (The Washington Post).

With no shortage of outrages to compel Taibbi’s pen, these pieces paint a shocking portrait of our government at work—or, as Taibbi points out in “The Worst Congress Ever,” rarely working. Taibbi has plenty to say about George W. Bush, Jack Abramoff, Tom DeLay, and all the rest, but he doesn’t just hit inside the Beltway. Taibbi gets involved in the action. He infiltrates Senator Conrad Burns’s birthday party under disguise as a lobbyist for a fictional oil firm that wants to drill in the Grand Canyon. He floats into apocalyptic post-Katrina New Orleans in a dinghy with Sean Penn. He goes to Iraq as an embedded reporter, where he witnesses the mind-boggling dysfunction of our occupation and spends three nights in Abu Ghraib prison. And he reports from two of the most bizarre and telling trials in recent memory: California v. Michael Jackson and the evolution-vs.-intelligent-design trial in Harrisburg, Pennsylvania.

A brilliant collection from one of the most entertaining political writers of today, Smells Like Dead Elephants is “the funniest angry book and the angriest funny book since Hunter S. Thompson roared into town” (James Wolcott).