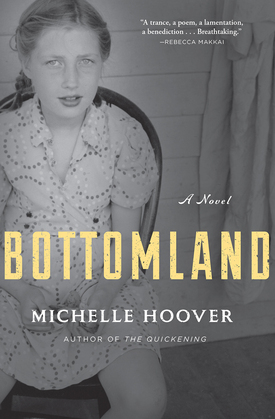 At once intimate and sweeping, Bottomland follows the Hess family in the years after World War I, as they attempt to rid themselves of the anti-German sentiment that left a stain on their name. But when the youngest two daughters vanish in the middle of the night, the family must piece together what happened while struggling to maintain their life on the unforgiving Iowa plains. In the weeks after Esther and Myrle’s disappearance, their siblings desperately search for them, through the stark farmlands to the unfamiliar world of far-off Chicago. Have the girls run away to another farm? Have they gone to the city to seek a new life? Or were they abducted? Ostracized and misunderstood in their small town in the wake of the war, the Hesses fear the worst.

From the acclaimed author of The Quickening, “Bottomland is more than a literary mystery. It’s a trance, a poem, a lamentation, a benediction. And it’s breathtaking. As in: remind yourself to breathe” (Rebecca Makkai, author of The Great Believers).

“Hoover skillfully interweaves many of the Hess family members’ narratives. Her descriptions of the bleak rural landscape are chilling. Fans of Jim Harrison’s Legends of the Fall will enjoy the plot; Willa Cather enthusiasts will relish the setting; and Theodore Dreiser readers will savor the gritty characterizations.” —Library Journal (starred review)